Regarding the Candidate of Kapolri, President Welcomes the Inputs of Watimpres and Team 9 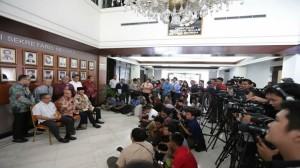 President Joko Widodo (Jokowi) welcomes the suggestions and input of Watimpres and Independent Team (Team 9) regarding the certainty of Police Commissioner General Budi Gunawan as the head of the Indonesian National Police (Kapolri).

Vice Chairman of the Independent Team, Jimly Asshiddiqie to the press saying that the President Jokowi enthusiastically accept suggestions and inputs, for consideration before taking a decision.

“There are so many inputs we say, and the President very amenable but not to be announced,” said Jimly Asshiddiqie, in the Main Building Lobby of the State Secretariat, Jakarta.

1. We, as an independent Consultative Team was asked to give inputs/opinions by the President will be a partner who is ready to give advice to the President on various matters related to the turmoil the relationship between law enforcement agencies.

2. We, on Wednesday (28/1) were invited by the President to provide input based on the analysis that has been conducted over the past two days, and our inputs to the President are as follows:

*   The President should give the certainty to any law enforcement that a suspect to resign from office, or position for status as a suspect, in order to maintain the dignity of the law enforcement agencies both Polri or KPK.

*   The President should not induct Kapolri with the status of the suspect, and reconsider to propose a new candidate for Kapolri that police institution may soon have a definitive Kapolri.

*   President should stop all efforts that suspected to be criminalization against any law enforcement personnel, both Polri or KPK and the public at large.

*   President should instruct the Polri or KPK to enforce the code of ethics of the profession ethics violations allegedly committed by Polri personnel or KPK.

*   President to reaffirm the commitment on eradication of corruption and law enforcement at large accordance with the expectations of the wider community. (WID/Humas Setkab/ES)