Regarding the Candidates of KPK leader, the Government Fully Respect to DPR Authority 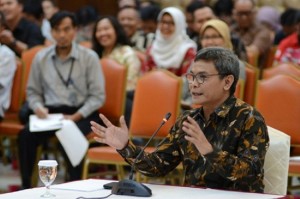 One KPK leader candidate, Johan Budi SP when the interview test that conducted by the Selection Committee, some time ago

Although the government has proposed the full number of candidates for the leadership of the Corruption Eradication Commission (KPK) as many as 10 people in accordance with the provisions, that is 2 times the amount of the leadership, the government handed over entirely to the Parliament about the number of candidates KPK leaders who will be selected through a fit and proper test.

“Regarding the Prospective of KPK leaders, because now in the House of Representatives (DPR), the full authority in the DPR. Whether the DPR would select all, it means all five were selected from the 10 or choose 4 that the authority of the DPR,” said Cabinet Secretary Pramono Anung, in the Presidential Palace area, Jakarta, Tuesday (17/11).

However, if chosen 3 (three) or 4 (four), according to Cabinet Secretary Pramono Anung, would subsequently need to be done like that before, it is decided for the executing task or not, of course the government will review.

“Once again, the government argued that because the authority is in the House of Representative (DPR) right now, please the Commission III to decide of 10 names (8 + 2), how many will be decided to be approved,” Pramono said.

In addition to 8 names, the House of Representatives (DPR) has also received two KPK leaders Candidates names generated by the previous selection committee, namely Busyro Muqoddas and Robby Arya Brata. House of Representatives plans to conduct a fit and proper test soon for selecting the candidates of KPK leaders for a periode of 2015-2020, from the ten names of the leadership candidates.  (UN/RAH/ES)