Regarding the Compensation of Crane Victims Rp 3.9 billion, Hopefully be Realized 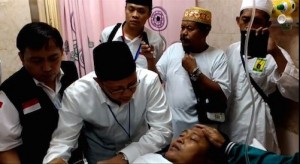 Minister of Religious Affairs, Lukman Hakin Saifuddin, when visited the victims of the crane collapse, in An Nur Hospital, Mecca, Saturday (12/9)

Minister of Religion, Lukman Hakim Saifuddin said that he got a lot of questions, related to the news that the compensation from the King of Saudi Arabia Salman Bin Abdul Aziz, to the unfortunate victims of the collapse of a crane at Masjidil Haram, Saturday (12/9). The compensation of 1 million Saudi Riyal (RS) or approximately of Rp 3.9 billion for the deaths or permanent disability, and 500 thousand RS or around Rp 1.950 billion for the injured. However, the news is still confirmed and clarification, Minister of Religion said.

To confirm this news, Minister of Religious Affairs said he already commissioned a team to the authorized parties to provide the news officially on behalf of the Government of Saudi Arabia, although the news widely circulated in some media of Saudi Arabia and quoted by a number of national media.

The Indonesian government itself, further Minister of Religious Affairs, this year has been imposed the insurance. Every Indonesian pilgrim who died due to an accident or not by accident will get the compensation money. Including the wound and cause physical disabilities, also get the insurance.

As reported earlier, at least 7 (seven) of Indonesian pilgrims died in a crane collapse incident in the Masjidil Haram, Mecca, Saudi Arabia, Saturday (12/9) ago. While dozens of other pilgrims were injured and treated at hospitals in the area around the city of Mecca. (Humas Kemenag/ES)/Sy.