Regarding the Development of 35,000 MW, Cabinet Secretary: It’s Not the Target, But Needs 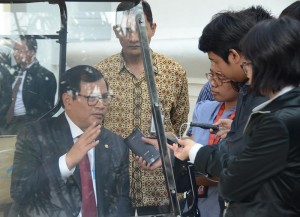 Cabinet Secretary, Pramono Anung asserted that government never targeted the development of power plants of 35,000 megawatts (MW). The figures of 35,000 MW, according to Pramono, is a necessity that electricity demand in Indonesia could be met properly.

The statement was made Cabinet Secretary, Pramono Anung in respond the statement of Coordinating Minister for Maritime and Resource, Ramil Rizal who mentioned that program of 35,000 MW power plants is difficult to achieve until 2019.

“In the Medium Term Development Plan (RPJM) that necessity not a target, because the necessity from time to time will increase. I’ve read the release Mr. Rizal. This ability to reach the target,” said Pramono Anung told reporters, in the Presidential Palace, Jakarta, Monday (7/9).

According to Cabinet Secretary, today there is a desire of the government, among 35,000 MW, of which 40 percent held by the State Electricity Company (PLN), 60 percent held by private power companies (independent power producer/IPP).

Where they obtained data on the demand for electricity? “PLN will calculate and Minister of Economy also will count on this. This concerns the necessity, the relatifity of necessity. But,  once again this is not the target. Its the necessity. The need is calculated how much is needed later,  It will be discussed specifically, one in regulatory matters and another one on the demand for electricity,” Pramono said.