Regarding the Execution of Drug Convicts, President Jokowi Affirms That Never Intervene 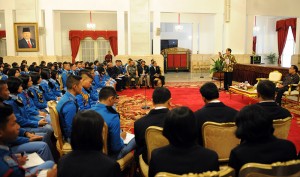 Although a number of protests coming from several countries, including some international institutions, President Joko Widodo (Jokowi) asserts, he will not grant a pardon or clemency for drug traffickers.

When receiving the visit of approximately 300 students from Taruna Nusantara High School, Magelang, Central Java, at the Presidential Palace, Jakarta, Monday (2/3), President Jokowi said, every day there are approximately 50 young people who died because of drugs. If multiplied per year, so here are 18,000 people die because of drugs.

“There are 4.5 million to be rehabilitated, 4.5 million in the last years we are only able to rehabilitate 18,000 people. I target this year as much as 5 times more than before, at least can reach 100,000 people who could rehabilitated,” said the President as he admits, the target is less rapidly with the number of young people who become victims of drugs.

But President Jokowi warned, we must be sure that it can be resolved. Therefore, the law to be firm. Execution will also to be firm. The president said, there is no forgiveness for drug traffickers. He also will not give clemency to drug traffickers. Likewise, on the request of several countries and international institutions.

“There is no such forgiveness. Let no one try to intervene in the sovereignty of our laws, our political sovereignty in the implementation of execution of drug convicts,” Jokowi said.

President mentioned, there’s a reason why the children of Indonesia should be optimistic. He said, from an economic standpoint, Indonesia is ranked 16 of the world, with a scale of 45 million middle class, we are 55 million skilled workers, and our macroeconomic stability and economists forecast, Indonesia will become the seventh largest economy in the world in 2030.

President Jokowi admitted that there are still many shortcomings and challenges in this country, as there are still 28 million poor people, in addition to 7.2 million people who have to look for jobs. However, with the existing development, including economic growth target of 5.1% to 5.7%, President Jokowi invites the students to remained looking at the future with optimism.

“If our economic growth target is achieved from 5.1% to 5.7%, the trust will arise, both from the community and from abroad that our economy is strong and sturdy, this also as an opportunity and as a the foundation that we will use for the future, so that our country will be better,” Jokowi said.

While receiving the high school students of Taruna Nusantara from different regions in the country, President Jokowi accompanied by Minister of State Secretary, Pratikno. (Humas Setkab/ES)