Regional Election Returned Into DPRD, the Government Respect the Decision Made By the House Representative 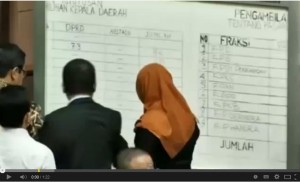 Regional Election Returned Into DPRD, the Government Respect the Decision Made By the House Representative

After nearly 10 years the election was directly voted by people, now eventually the governor election as well as regent / mayor election is returned to Parliament (DPRD). The Plenary session which was held from Thursday (25/9) until Friday (26/9) has finally agreed the Draft of Law On Regional Election (RUU PILKADA) through vote, at 01.40 local time, with option that is to return regional election back to DPRD.

In the plenary session led by Deputy of the House Representatives Priyo Budi Santoso, the option was supported by Merah-Putih coalition that are (Golkar, PKS, PAN, PPP, and Gerindra) with 226 votes. While the other option that is direct election by the people was only supported by PDIP, PKB and Hanura with 135 votes. Democratic party choose to walk out after their proposal that is direct election by the people with 10 requirements turned into long debate in the plenary session at DPR-RI.

On behalf of the President of Republic Indonesia, Gamawan expresses gratitude to leaders and members of the House (DPR-RI) who actively involved in the discussion of RUU-PILKADA which has been going well in three years. We also like to express our gratitude to those who contribute by giving any suggestions in the process of discussion of this RUU-PILKADA, said Gamawan. (WID/ES)(Ifp).