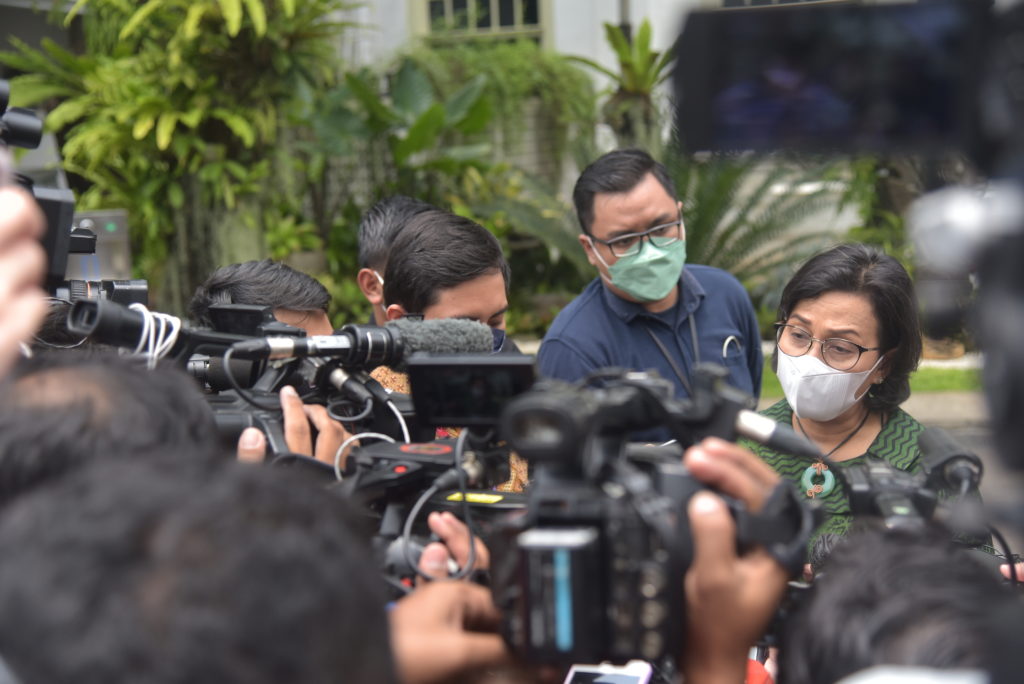 Minister of Finance Sri Mulyani Indrawati delivers a press statement after attending a meeting on the preparation of Indonesia’s ASEAN Chairmanship of 2023, at the Presidential Palace, Jakarta, Tuesday (09/13). (Photo by: PR of Cabinet Secretariat/Agung)

President Joko “Jokowi” Widodo has ordered regional governments to use the regional budget (APBD) to deal with the impact of the latest fuel price adjustment.

“As directed by the President, the issue of inflation control in the regions is critical to be addressed. Regional leaders must carry out early detection of possible movement in prices, especially food and transportation prices,” Minister of Finance Sri Mulyani Indrawati said after attending a meeting on the preparation of Indonesia’s ASEAN Chairmanship of 2023, at the Presidential Palace, Jakarta, Tuesday (09/13).

The Minister went on to say that the Government has provided a legal umbrella in using the instruments of the State Budget (APBN) and regional budget, namely the General Allocation Fund (DAU) and the Revenue Sharing Fund (DBH). Two percent of these funds can be used to ease the effects of the fuel price adjustment in the regions.

On that occasion, the Minister also said that the two percent of the DAU and DBH can also be allocated to support transportation in their respective regions or support distribution, availability, and quantity of food supplies.

“We will constantly monitor regional governments in using their budget in the next few weeks. As conveyed by the President and Minister of Home Affairs, there is an emergency expenditure fund amounting to Rp9.5 trillion and the general transfer fund from DAU and DBH amounting to Rp2.7 trillion,” she said.

According to the Minister, regional governments are expected to use their budget quickly, accurately, and accountably to handle a potential hike in prices.

“Thus, the Government’s decision [to raise the prices of subsidized fuels] might have negative impacts, but we can reduce it through several measures taken by regional governments,” she added.

The Government will monthly monitor the data from Statistic Indonesia (BPS) regarding the regions’ ability to control inflation and stabilize prices in their regions.

The Minister also pointed out that the Government will provide incentives in the form of the Regional Incentive Fund (DID) for regional governments that can control or keep the inflation rate lower than that of the national level. The Government also plans to give around Rp10 billion for the top 10 regions at the province, regency, and city levels with the lowest inflation rate. (FID/AIT/ST) (RIF/MMB)