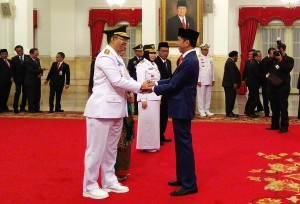 President Joko Jokowi Widodo asserted that he signed a Presidential Regulation that allows the use of regional tobacco excise duty to help address the deficit suffered by the Healthcare Security Provider Body (BPJS Kesehatan) because it is mandated by the Law.

Yes, it has already been issued. The Law has mandated that 50 percent of tobacco excise duty may be used to finance health services, President Jokowi told the reporters after inaugurating new Governor and Deputy Governor of West Nusa Tenggara (NTB) at the State Palace on Wednesday (19/9).

The President went on to say that the deficit must be tackled so that the BPJS can continue providing best healthcare services to the public. Therefore, he added, the Government has decided to cover BPJS deficit with money generated from tobacco excise.

Regarding the accountability aspect, President Jokowi said that he has instructed Indonesia’s National Government Internal Auditor (BPKP) to audit the deficit in the BPJS. That means all procedures, in term of accountability, have been carried out, the President added.

The President added that he has also instructed Managing Director and Director of the BPJS to improve their system, be it in term of verification or finance applied throughout the country, from the Central government to regional governments, regencies and cities. It is not easy to control and monitor claims from hospitals. It is not easy, the President said,

It is quite difficult to control and verify all hospitals around the country. Hence, it is necessary to improve the system periodically, he added.

For the record, based on the Development Finance Comptrollers recent review, the BPJS Kesehatans deficit is estimated to reach Rp 10.99 trillion this year. (DNA/JAY/ES) (RAS/EP/Naster)