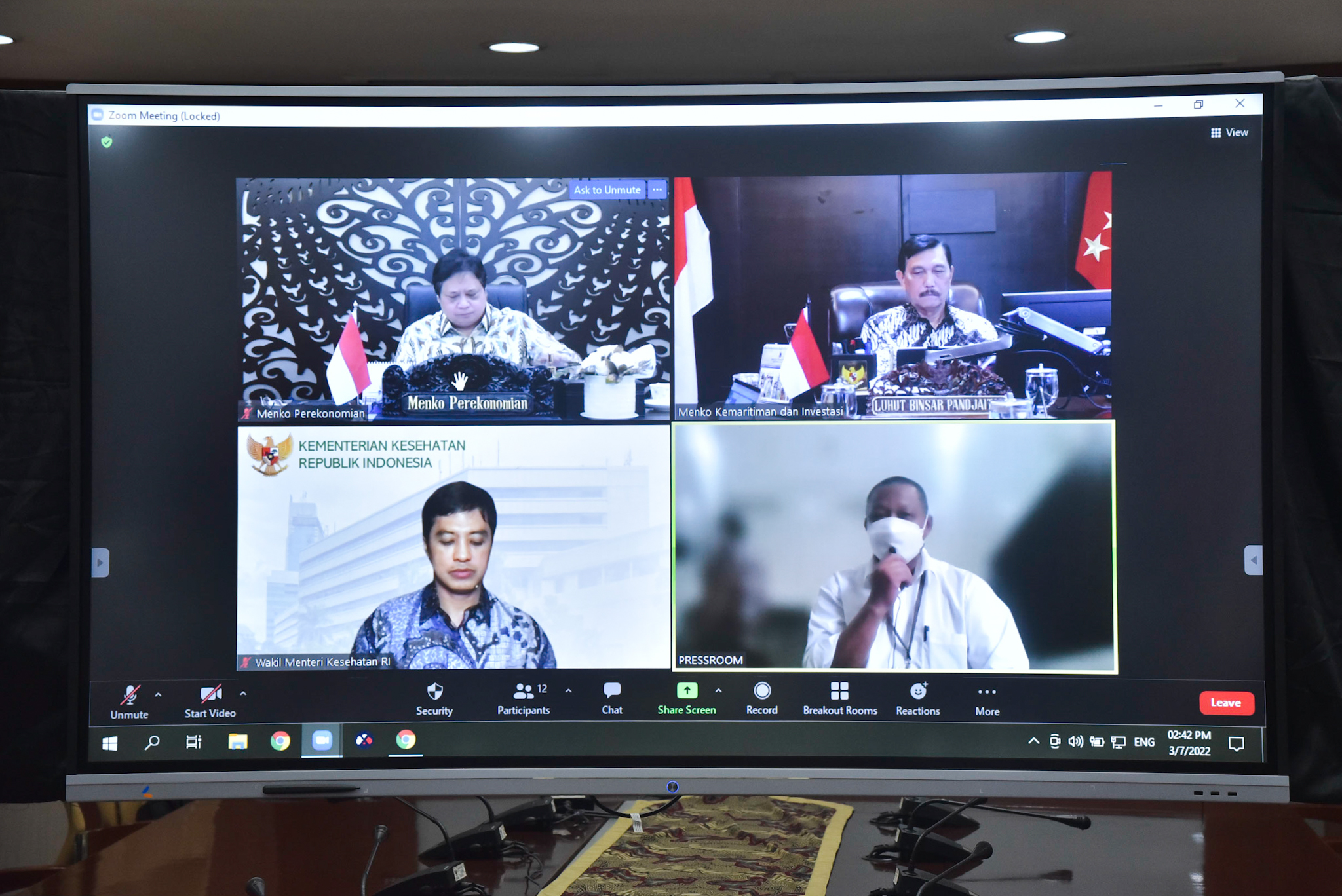 A number of ministers deliver press statement through video conference after a limited meeting on the evaluation of public activity restrictions (PPKM), Monday (03/07). (Photo by: PR/ Agung)

The number of daily and active COVID-19 cases in regions outside the islands of Java and Bali has shown a declining trend, according to Coordinating Minister for Economic Affairs Airlangga Hartarto.

“A number of provinces have passed the peak and have been showing declining trends thereafter, such as the provinces of North Sulawesi, Papua, South Sumatra, South Sulawesi, North Sumatra, North Kalimantan, West Sumatra, Riau Islands and Lampung. Meanwhile, West Kalimantan and East Nusa Tenggara have seen an increasing trend,” he said in a press statement after joining a limited meeting on the evaluation of public activity restrictions (PPKM) through video conference, Monday (03/07).

As of March 6, 2022, the number of daily COVID-19 cases in regions outside the islands of Java and Bali stood at 8,158. The figure dropped significantly from 19,807 cases during the peak of daily cases on February 23.

The Minister added that the bed occupancy rate (BOR) at hospitals in three provinces with highest active cases (more than 15,000 cases) outside Java and Bali is still under control indicated by a low proportion in number of hospital beds specifically converted to treat COVID-19 patients.

For the record, the number of active cases in North Sumatra province is 21,338 with 26 percent of BOR and 21 percent of bed conversion rate.

In terms of centers for isolation, the Government provides 36,470 beds with occupancy rate of 10 percent.

On that occasion, he also told the public regarding implementation of travel bubble system in the tourist door between Riau Islands and Singapore (Batam Bintan-Singapore). Visa on Arrival (VOA) will apply on Batam and Bintan.

Regarding the event of MotoGP Mandalika to be held on 18-20 March, West Nusa Tenggara province will implement PPKM Level 1. Vaccination coverage in that province reached 92.5 percent for the first doses and 70.6 percent for the second doses.

Since the vaccination coverage has exceeded 70 percent, he added, the spectators who are fully vaccinated are not obliged to take PCR or antigen test.

Airlangga added that technical preparation for the race is still ongoing and tickets for 60,000 spectators during race day are sold out.  (FID/UN) (RAS/MUR)