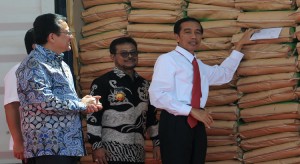 President Joko Widodo (Jokowi) to remind the business community, particularly the exporters not to complain in competing in the market. President even challenging the entrepreneurs to persistent fight, especially when the economy is sluggish.

“I do not like to see entrepreneurs who often complain. Even the slightest chance to be entered, ” President Jokowi said while inaugurating the release of a number of leading commodity exports of South Sulawesi province in the port of Soekarno-Hatta in Makassar, South Sulawesi (Sulawesi), Monday (3/8).

The export covers 27 commodities including Virgin Coconut Oil (VCO) Gold quality with a value of Rp 1.201 trillion. Especially for VCO, will be sent to Japan, which makes it excellent commodity. Besides Japan, South Sulawesi commodities are also exported to 24 countries covering 333 crates.

President Jokowi deeply appreciated the steps taken by the Government of South Sulawesi province in encouraging the acceleration of national economic development.

“The economy is slowing but do not make our wits end, the Province in Indonesia should be able to capture the opportunities that exist to afford competitive,” Jokowi message.

President then pointed to examples of commodities that are not considered in a number of areas but it is prepared in South Sulawesi, such as wheat bran and eggs of flying fish.

Previously, the Governor of South Sulawesi, Syahrul Yasin Limpo call this export is a response to the economic slowdown that occurred in Indonesia at this time.

The Weakening of Rupiah

Alluding to the weakening of the rupiah against the US dollar, President Jokowi asked the entrepreneurs and exporters use to open up new export markets.

According to the President, usually, we only see the traditional markets, such as America, Europe, China, Japan, Korea. Whereas many other countries whose market can be entered.

“Some countries in Latin America, Africa, the Middle East and other countries provide opportunities of commodities and products from Indonesia,” Jokowi said.

President claims to be very optimistic (the economy) that with the weakening of the rupiah against the US dollar, there were utilize and benefit.

By positioning amount in figures of Rp13.400 – Rp13.500 per US dollar, according to the President, there is no problem as long as each region is able to utilize the potential of the area.

President Jokowi appreciated the achievements of South Sulawesi, which is able to open up export opportunities by improving the trade balance.