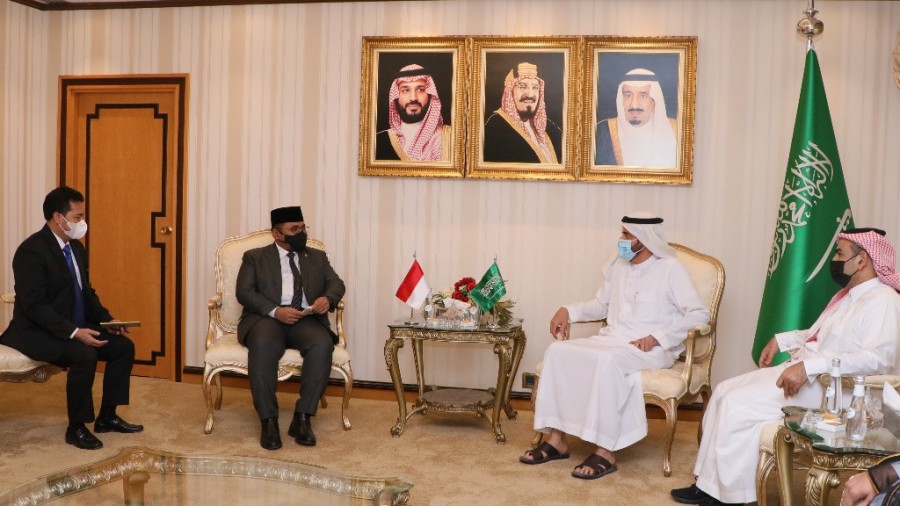 Indonesian Minister of Religious Affairs Yaqut Cholil Qoumas Monday (22/11) discussed umrah (nonmandatory Muslim pilgrimage to Mecca that can be performed at any time of the year) for Indonesian pilgrims with Saudi Arabian Minister of Hajj and Umrah Tawfiq F. Al-Rabiah in Mecca, Saudi Arabia.

According to Yaqut, the discussion with Saudi Arabian hajj and umrah authority has seen in a positive development.

“Thank God, today I met Saudi Arabian Minister of Hajj and Umrah Tawfiq F. Al-Rabiah in Mecca. Minister Taqfiq said that Indonesia is a priority for hajj and umrah,” the Minister said after the meeting.

Yaqut also underscored that the result of his meeting with Saudi Hajj Minister is quite progressive and effective, which is inseparable from the previous meeting between a team from Indonesian Ministry of Religious Affairs and Saudi Vice Minister of Hajj.

“We really hope [umrah for Indonesian pilgrims] can be carried out soon,” he said, adding that both parties will continue to communicate intensively and Indonesian Religious Ministry will devise a scenario and timeline of umrah pilgrim departure with health protocol observance as the most important aspect in the implementation regulation, which will be delivered to Saudi Hajj Ministry for review.

“The Hajj Minister appreciated the progress of the initial discussion that has been carried out by Vice Hajj Minister and Religious Ministry’s team. We hope the follow-up preparations, both in Saudi and in Indonesia, can be completed immediately so that umrah can be carried out soon,” he said.

In addition to discussing organizing umrah, the two Ministers also discussed measures to improve bilateral cooperation between the two countries on hajj and umrah.

“We share the same vision in enhancing cooperation, such as in hajj simulations or integrated [hajj] counselling,” he remarked. (PR of Ministry of Religious Affairs/UN) (DH/EP)