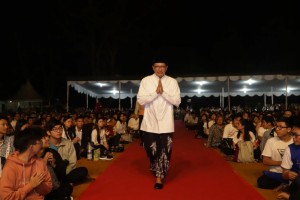 Vesak Day is a moment for self-evaluation, introspection, and soul purification, Minister of Religious Affairs Lukman Hakim Saifuddin has said.

“Our common goal is to achieve happiness and progress,” the Minister said in his remarks during the 2563 Vesak Day celebration in the courtyard of Borobudur Temple, Magelang, Central Java, Saturday (18/5).

Lukman added that the Vesak Day, which falls on 19 May this year, is a moment for Buddhists to commemorate three important events, namely the birth of Buddha, the enlightenment (Buddhahood), and the death of Gautama Buddha.

On that occasion, the Minister expressed hope that all Buddhists can emulate the teachings of Buddha and live their life according to the Dhamma.

“Be aware of reality. Don’t be fooled. Live your life according to the Dhamma. A person who lives with the Dhamma will live happily, in this life and in the next life,” Lukman quoted the 168th verse of the Dhammapada, a collection of Buddhas sayings.

Lukman went on to say that religious moderation and diversity are important for Indonesia and that diversity is an asset for the country.

“We value our nationality and our diversity. Differences are not our weaknesses. They are our strengths, he said.

Indonesia is home to some 1.7 million Buddhists as of 2010 or less than 1 percent of the countrys population, according to the Central Statistics Agency (BPS). (Humas Kemenag/ES)