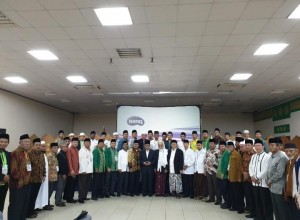 Ministry of Religious Affairs has called on mosque imams (worship leader) around Indonesia to promote moderation in religion for the sake of harmony.

Amin – who was present on behalf of Minister of Religious Affairs – also reminded the people that mosque imams should understand the characteristics of ummah (Muslim community) with their diversity. By doing so, he added, imams are expected to deliver preaches at mosques in an appropriate manner.

Essentially, through preaches at mosques, all Muslims are reminded to be united in faith and worship, to be tolerant in addressing differences, and to prioritize the principle of mutual protection in fostering muamalah (social interaction) and ukhuwah (brotherhood), Amin said.

Amin added that mosques should not only be regarded merely as a building but also as a multi-functional religious institution. The function of mosque is always related to the quality of ummah, be it in the aspect of moral, spiritual, and temporal necessities of life, Amin added.

He also said that mosques play a crucial role in developing a righteous, prosperous and dignified community. For that reason, in practicing dawah (spreading and conveying the message of Islam to people) and other religious teaching at mosques, people need to take into account the needs of ummah, including the millennials, he added.

The millennials have a huge curiosity and interest to broaden their knowledge about Islam. However, they need different approaches than conventional dawah, Amin explained.

Amin also called on all mosque imams to always guard the function of mosque as the center of religious practice and community guidance that spreads the messages of moderate Islam. Mosques must become a house of change for all Muslims to improve their spiritual, moral, and social aspects. Let us maintain unity of the people, the nation, and our beloved country! he concluded.

For the record, the National Congress – which was opened by Vice President Jusuf Kalla – is held for three days from 25 until 27 January 2019.  (Ministry of Religious Affairs PR Division/ES)