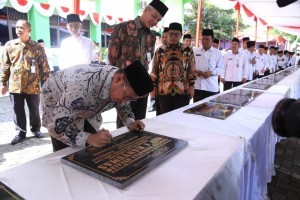 At the end of 2018, Ministry of Religious Affairs launched One-stop Integrated Service (PTSP) for 34 provinces in Indonesia marked by the inauguration of PTSP of the Ministrys Central Java Regional Office, in Semarang, Monday (31/12).

This is a manifestation of our endless efforts to provide services for the people, Minister of Religious Affairs Lukman Saifuddin said during the inauguration.

Through the PTSP and other information technology applications which have been developed, the Minister expressed hope that the people can get access to the Ministry services in a easier, cheaper, faster and more transparent manner.

The Minister went on to say that PTSP would be gradually available in all Ministry of Religious Affairs Offices at regency/city levels in Indonesia by 2019. Therefore, Lukman instructed his office to prepare themselves by improving the services available.

The quality of services must be improved from time to time, the Minister firmly said.