Remove the Doubts, 3 Ministers Visit Residents that Affected by the Lapindo Mudflow in Sidoarjo 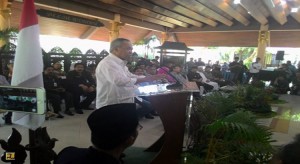 Minister of PUPR, Basuki Hadimuljono delivered a speech at a meeting with residents that affected by the Lapindo mudflow, in Sidoarjo, Tuesday (14/7)

Following up on a letter of agreement of anticipation funds for the affected population of Sidoarjo mud that was signed in Jakarta, on Friday (10/7), three Work Cabinet ministers, namely; Minister of Finance, Bambang Brojonegoro, Minister of Public Works and Housing, Basuki Hadimuljono, and Minister of Social Affairs, Khofifah Indar Prawansa visited the people affected by the mudflow ar Sidoarjo Regency Hall, Tuesday (14/7) afternoon.

“The arrival of three (3) ministers is a realization of Government commitment by the humanitarian aid to help the citizens and ease the burden of the people affected by mudflow, in Sidoarjo,” Minister of Public Works and Housing said, Basuki Hadimuljono.

With the presence of three Ministers in Sidoarjo can remove doubts of citizens, and as an embodiment of humanity the Government, to be present to help citizens who have been afflicted for years.

“Joko Widodo convey Best regards and plans to visit the brethren in Sidoarjo,” said Basuki to residents affected by the Lapindo mudflow.

In an event attended by East Java Governor Soekarwo, Regent of Sidoarjo Saifullah, a member of House Commission V Nusyirwan, DPRD members Sidoarjo and hundreds of residents affected by the mud in the affected area map, Minister of Finance Bambang Brodjonegoro submist the agreement to the Chairman of the Executive Agency Mud Disaster Sidoarjo (BPLS) Sunarso.

Letters of agreement between the Republic of Indonesia cq. the Government of the Republic of Indonesia and PT Lapindo Brantas Inc and Minarak Lapindo Jaya was signed by the Minister of Finance Bambang Brodjonegoro and President Lapindo Brantas Inc. Tro Setia Sutisna and President Director of PT. Minarak Lapindo Jaya Andi Darussalam Tabusalla.

According to Bambang, the anticipation funds in the agreement amounting to Rp 781.688.212.000, – conducted through DIPA Section 999.99, Working Unit of the Executive Agency of Sidoarjo Mud Disaster.

“The funds sent to the account belonging to the community in Affected Area Map March 22, 2007, after a process of validation of the data verification results of BPKP,” Bambang said.

Similarly, the loan repayment period not later than four years from the signing of this Agreement. The loan interest rate of 4.8 percent per year of the loan amount.

If the Lapindo Brantas Inc. is unable to repay the loan, according to Minister of Finance, the assurance land and building assets that have been paid by Lapindo worth Rp.2.797.442.841.586, – switching to and in the control of the Government entirely.

Minister of Social Affairs Khofifah Indar Parawansa invites all parties concerned to accelerate the administrative processes in the validation of various residents files that affected by Lapindo mud. Regent of Sidoarjo Sidoarjo and the Special Committee of Parliament of Sidoarjo, were also invited pro-active to help the validation process, including the issuance of death certificates for people who have died.