Removing Contingent to the World Jamboree, President: Show the Professionalism of Indonesian Scouts 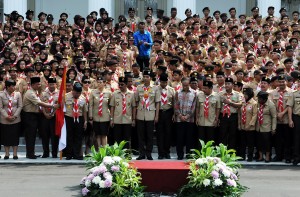 President Jokowi photographed with the contingent of Indonesian Scouts delegation, which will follow the World Jamboree in Japan, at Merdeka Palace, Jakarta, Friday (24/7)

In his speech, President Jokowi expressed congratulations of strugle for Indonesian Scouts, which will follow the World Scout Jamboree.

“To all my brothers and sisters, who get the mandate as representatives of Indonesian, bring the good name, carry the image, and in fact that the Indonesian national spirit that we want to build in accordance with the spirit promoted by the World Scout Jamboree in 2015 with the theme in Japanese language “wa” or the spirit of unity,” President Jokowi said.

The Head of State asked to the Indonesian Scouts contingent to show a strong personality, a strong character, the character of Indonesian. “My brothers and sisters all have to appear to show that we have the soul of the nationalism. Show identity, show character, show professionalism as Indonesian scout,” he said.

Related with the appearance of cultural performances that will be featured in the World Jamboree, President Jokowi asked to show the performances that can show the values of personality, values attitudes and behavior of Indonesia, diverse but one (Unity in Diversity), which became the adhesive of Indonesian nation’s unity and integrity.

Upon the return from following the World Scout Jamboree, President Jokowi asked the Indonesian contingent to return and bact to do the activities with the community. “Spread and convey positive values, of the messages contained on the spirit of unity, so that the positive values will usually life and embedded in the hearts of Indonesian young generation,” he said.

The Head of State emphasized that the spirit of unity, we will be prepared together, hand in hand to advance our beloved country in realizing of the Great Indonesia.  (DID/RAH/ES)