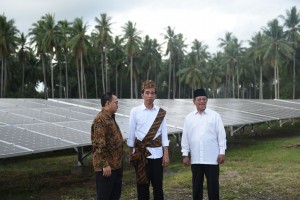 Minister of Energy and Mineral Resources (ESDM) Sudirman Said explained that the infrastructures to be inaugurated on Tuesday were parts of infrastructures projects on the energy covering 10.7 MW in 174 locations which have been built since 2015.

In 2016, he said that Ministry of ESDM would build 31 MW of renewable energy-powered electric generators in 131 more locations.

There are not many PLTS that will be built but it will bring great benefits to the people who live in the islands, outermost and remote areas, Sudirman said.

Based on the previous commitment, the Government is currently manifesting 35,000 MW of electricity supply.

As many as 25 percent of the number or around 8,800 MW is expected to come from the renewable energy.

Renewable energy will be the solution. The funding for this program is not only from the State Budget (APBN), but also from State-owned Enterprises (BUMN) budget, including  state-run electric company PLN, state oil and gas company PT. Pertamina, and state-owned electronics maker LEN as well as from private sectors in the country, Sudirman added.

Here is the list of eight renewable energy infrastructures inaugurated on Tuesday: