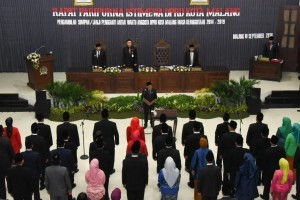 The Malang Legislative Council (DPRD) has officially replaced their members who were named by the Corruption Eradication Commission (KPK) as graft-suspects through the Inter-Time Substitution (PAW) mechanism.

A total of 40 new members of DPRD were sworn in by Acting Speaker of Malang DPRD, Abdurrohman, at the Malang DPRD Building on Monday (10/9).

On the occasion, Soekarwo advised the 40 newly appointed members to maintain their integrity, so that they could show good performance. In terms of public service (this DPRD) is very good. Only integrity issues that need to be improved, he said in his remarks.

Minister of Home Affairs Tjahjo Kumolo also appreciated the step of accelerating the PAW of Malang DPRD members in order to build effective and efficient governance.

On behalf of the Central Government, we appreciate East Java Provincial Government, especially to Governor Soekarwo, for the inauguration of 40 members of Malang DPRD today, Tjahjo said.

As previously reported, the KPK has named 41 out of 45 members of the Malang DPRD suspects in a case of bribing in stipulating draft of regional government regulations (Raperda) on the amendment to the 2015 Regional Budget (APBD).

There is one of the 41 members of the Malang DPRD who had been inaugurated earlier and the remaining 40 replacements were officially inaugurated on today (10/9). (Puspen Kemendagri/ES) (GWH/EP/Naster)