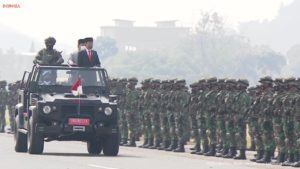 President Jokowi and Minister of Defense inspect soldiers during the ceremony of Reserve Component Inauguration of 2021 in West Java province (07/10) (Source: YouTube Channel of Presidential Secretariat)

The Government has announced that the Reserve Component (Komcad) of the Indonesian National Defense Force (TNI) are only mobilized for national, defense interests.

The statement was made by President Joko “Jokowi” Widodo on Thursday (07/10) during the inauguration of the Reserve Components of 2021 at Education and Training Center for Indonesian Army’s Special Force in West Bandung regency, West Java province.

“The inauguration of the Reserve Component will strengthen people’s defense, security system,” the President said.

The Head of State also underscored that the sovereignty of the state, the territorial integrity of the state, and the protection of the Indonesian nation and people are everything, adding that the TNI as the main component must be on standby to ensure them, while it also needs to be supported by the reserve components and supporting components.

“It is our national defense system that is universal. People’s defense, security systems that involves all citizens, regions, and national resources,” President Jokowi said.

Every citizen, the President added, has the right and is obliged to participate in efforts to defend the state.

“I would like thank all of you for voluntarily registering and participating in the selection and basic military training. And today, all of you are inaugurated as members of the Reserve Component,” President Jokowi added.

The President went on to say that the active period of the Reserve Component is not every day. According to him, after today’s inauguration, the reserve component members can return to their respective professions. However, they must always be on standby if the state needs them.

On that occasion, the Head of State also said that the Government will continue to carry out comprehensive modernization of the primary weapons system (alutsista) of all TNI’s service branches, including thr Indonesian Army, the Indonesian Navy, and the Indonesian Air Force.