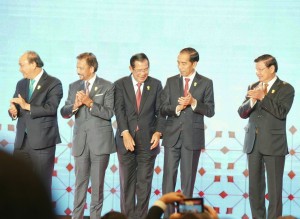 During the retreat session of the 34th ASEAN Summit in Bangkok, President Joko “Jokowi” Widodo, pointed out the importance of improving security situation in Rakhine State, Myanmar to carry out successful repatriation of Rohingya refugees, Minister of Foreign Affairs Retno Marsudi has said.

“Once again, the President has pointed out the (security) problem,” Retno stated at a press conference at Athenee Hotel, Bangkok, Thailand, Sunday (23/6).

The President, she added, also noticed the issue of trust deficit between Myanmar, Bangladesh Governments and refugees in Bangladeshs Cox’s Bazar.

Therefore, President Jokowi said that ASEAN could help to facilitate communication between Myanmar, Bangladesh and the refugees at Coxs Bazar, she added. The President, Retno added, also expressed belief that communication is a vital tool in the repatriation process and its preparation.

“In the future, we will see whether we will be able to develop a time frame for meeting implementation. The timeline will help us to identify the (repatriation) progress faster. The President affirmed that progress is the most important part of (the repatriation), she said

The Foreign Minister stated that during the retreat session several issues have emerged, including the Rakhine State issues, Indo-Pacific issues, the Regional Comprehensive Economic Partnership (RCEP) issues, and the South China Sea issues.

On the discussion of the Indo-Pacific issues, the Minister added, ASEAN leaders thanked Indonesia for initiating the ASEAN Outlook concept for the Indo-Pacific and the concept was successfully adopted during the Summit.

“Earlier, Prime Minister Hun Sen stated the outlook shows the ASEAN independency in its attitude, in its view towards the Indo-Pacific environment situation as well as the following cooperation,” Retno stated.

The President, Retno continued, also emphasized the importance of ASEAN Outlook on the Indo-Pacific issues amid the current global uncertainty.

The Outlook, she added, reflects centrality and strength of ASEAN in respecting peace, a culture of dialog, and strengthening cooperation. According to her, the ASEAN Outlook, amid its independence, will open the door for cooperation. (DND/DID/ES)