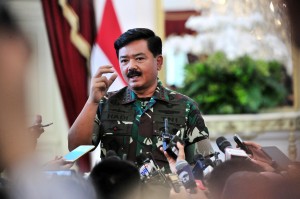 We will revise Law Number 34 of 2004 article 53, the Commander told reporters after opening the TNI-Polri (the Indonesian National Police) Leadership Meeting at the State Palace, Jakarta, Tuesday (29/1).

In addition, the Government and the TNI Commander will also propose the revision of Article 47 on the opportunity for positions in ministries/institutions that can be filled by the TNI personnel.

For the record, President Jokowi has ordered Minister of Law and Human Rights Yasonna Laoli and the TNI Commander to revise the TNI retirement age limit from 53 to 58 years.  According to the President, 53 years old is still considered a fit and productive age.

Echoing the Presidents statement, Hadi said TNI soldiers who are 53 years old are still too early to be retired. In the navy, as a person is getting older, he will be more aware of the vessel problem, Hadi said, adding that the TNI still needs their expertise and experience in services. (FID/JAY/ES)