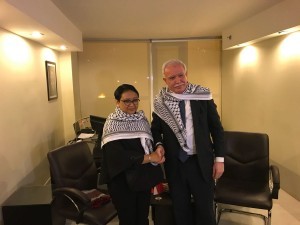 The two ministers discussed several matters related to Jerusalem issues and moves to fight for rights and independence of Palestine.

Official Twitter account of the Indonesian Ministry of Foreign Affairs (@Portal_Kemlu_RI) reported that both ministers also discussed the result of the meeting of foreign affairs ministers of the Arab League  and the preparation of the Organization of Islamic Conference (OIC) Extraordinary Summit to be held in Istanbul, Turkey on Wednesday (13/12).

Minister Retno reiterated the strong commitment of the people and the Government of Indonesia to always give their support for Palestine, @Portal_Kemlu_RI said.

Previously, Retno also met with Jordanian Minister of Foreign Affairs Ayman Safadi in Amman on Monday (11/12) to discuss the preparation of the Summit.

We agree to continue coordinating in fighting fort rights and independence of Palestine, Retno said.

After meeting with their Palestinian and Jordanian counterparts, Minister Retno is scheduled to fly to Istanbul, Turkey, to join President Jokowi to attend the Summit, which will discuss the action taken by the United States that recognizes Jerusalem as the capital of Israel.