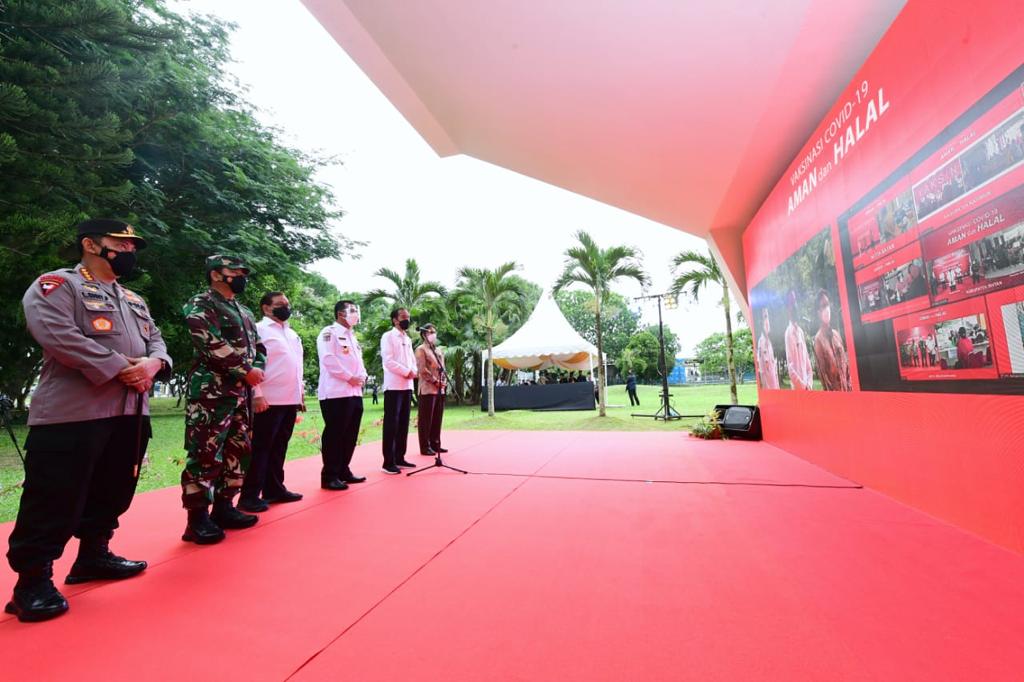 “We hope Riau Islands province can increase vaccination rate so that the province will immediately reach herd immunity and return life to normal,” President Jokowi said during an inspection of mass vaccination held simultaneously in 67 locations in seven regencies/municipalities throughout the province on Wednesday (19/5), through video conference, from PT Bintan Inti Industrial Estate (BIIE), Bintan Regency, Riau Islands.

President Jokowi applauded the Riau Islands provincial government for its swift response in implementing the mass vaccination which targeted 15,500 people. He also ordered Minister of Health to provide vaccine supply to the province on schedule.

In addition, the President called on regional heads in regencies and municipalities to prioritize vaccination for the elderly.

On that occasion, President Jokowi also received reports on vaccination from regional heads of seven regencies/municipalities in Riau Islands province. Regional government of Natuna Regency has reported that it has rolled out vaccines to 5,613 people, excluding 500 people to be vaccinated in today’s mass vaccination. In the vaccine distribution, the regency has faced some obstacles when delivering it to sub-districts bordering on seas.

Regional government of Batam Municipality has reported that it has rolled out vaccines to 72,726 people out of the target of 774,803 people consisting of 36,107 elderly and 738,696 of working age population aged 18 to 59. On today’s mass vaccination, Batam Municipality will vaccinate 7,437 people spread in 16 locations in 9 sub-districts.

Regional Secretary of Batam, Jefridin Hamid, also expressed hope that Batam Municipality will receive vaccine supply under the Gotong Royong scheme given its industrial city status where many workers support the economic growth and contribute to the national economic recovery.

Responding to that request, President Jokowi said that Ministry of Health will prioritize vaccine supply to Batam, particularly for the industrial sector. For the record, the Government has secured 420,000 doses of vaccine for Gotong Royong vaccination from the total target of 30 million doses.

Also on that occasion, regional government of Anambas Islands has reported that it will roll out vaccines to 32,415 people, excluding 1,500 people to be vaccinated in today’s mass vaccination.