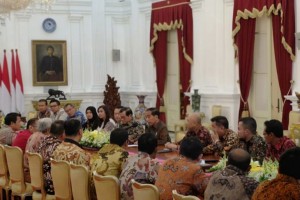 Rice supply and price are stable, according to representative of the Indonesian Rice Milling and Rice Seller Association of Cipinang Central Market Billy Haryanto during a meeting with President Joko Jokowi Widodo on Thursday (24/1).

In the meeting attended by representatives of the association and a number of high-ranking officials at the Merdeka Palace, President Jokowi said that he would like to know the current and future conditions of rice supply and price at Cipinang market as well as in the regions.

In the meantime, Managing Director of PT Food Station Tjipinang Jaya Arief Prasetyo before the meeting also assured the price and supply stability of commodity. (ANT/ES)