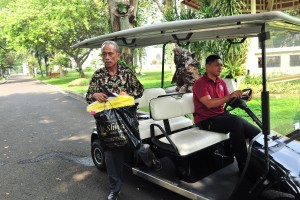 Usma, stall owner whose vendor was destroyed during riots last week, gets off a golf cart after meeting with President Jokowi at Merdeka Palace, Jakarta, Monday (27/5). (Photo: Jay/PR)

President Joko Jokowi Widodo on Monday (27/5) at the Merdeka Palace welcomed Usma, a stall owner in Central Jakarta whose kiosk was looted during the post-election riot last week.

During the meeting, President Jokowi gave assistance to Usma to help him reopen his business and encouraged him to work harder. Alhamdulillah, thank you Mr.President, he said.

Usma also expressed hope that Jakartas situation will be safer so street vendors can run their business again.

Although his goods were all looted, Usma who has been running the business for 25 years, firmly said that he will not give up and will be back in business soon after Eid holiday. (AIT/JAY/ES)