Rules and Regulations Should be Evaluated: President Jokowi 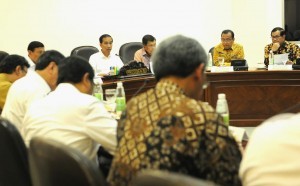 public services, but also upstream side, i.e. improvement of regulation and procedure aspects. Therefore, the President asked to prioritize regulation restructuring in this times legal reform.

Yet, the President reminded that Indonesia is a country that upholds the rule of law, not a country of regulation. Thus, the rules and regulations need to be evaluated or reviewed so that they could be in line with the soul of Pancasila (Five Principles), the mandate of the constitution, as well as our national interests, the President said when delivering an introductory remarks at a Limited Meeting on Follow-up of Legal Reform Discussion, at the Presidential Office, Jakarta, Tuesday (17/1) afternoon.

Moreover, the President added, unsynchronous regulations should be evaluated because they make things complicated and cause misinterpretation that would weaken Indonesias competitiveness in global competition.

President Jokowi also asked to carry out restructuring of rules and regulations database. Make use the advanced information technology to develop e-regulation services, the President said.

The President emphasized that in 2017, the Government commits to focusing on resolving social gap issue, including access disparity to obtain justice. The President mentioned that there are still a lot of people who do not get adequate legal protection as well as assistance to fight for justice.

At the beginning of his introductory remarks, President Jokowi reminded that the first legal reform has been started. One example of this reform is an all-out illegal levies eradication, particularly in public service centers.

According to the President, illegal levies eradication must be an entrance door so that public services will be faster, better, and more qualified. To Indonesian National Police (Polri), the President asked to improve the services of SIM (Drivers License), STNK (Vehicle Registration Number), BPKP (Owners Logbook), SKCK (Police Clearance Letter), and fast traffic ticketing handling. Polri should also improve their online services so people can make non-cash payment through banks.