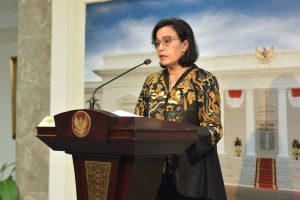 Rupiah depreciation that has reached more Rp15,000 Rupiah per one US Dollar is not related to the national crisis, Minister of Finance Sri Mulyani has said.

According to her, the depreciation is mainly due to external factors.

Most of the factors that cause rupiah depreciation are mainly from outside the country, Sri Mulyani said in a press conference at the Merdeka Palace, Jakarta, Thursday (10/4).

According to Sri Mulyani, one of those external sentiments is Italys high inflation although the country is now committed to narrowing down its state budget. Nevertheless, she noted that the Government still has to be vigilant, especially when it comes to balance of payment and controlling imports.

Regarding the steps that the Government has taken to tackle the depreciation, Sri Mulyani said that central bank, Bank Indonesia (BI) would implement three policies, including policies related with interest rate, micro-prudential policies, or intervention policies.

In terms of fiscal aspect, Sri Mulyani ensured that the Ministry would continue monitoring imports, especially for consumption goods and goods that are already produced at home.

Regarding fuel, the Minister said, fuel oil is one of Indonesias major imports and expressed hope that that the B20 program could help cut imports. Well continue monitoring the program. At the end of September, there was a rise in import instead. Well look into it, she said. (DNA/RAH/ES)(HYP/EP/Naster)