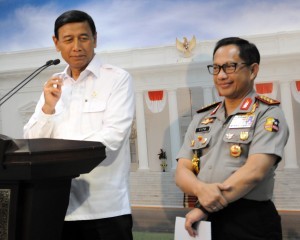 Coordinating Minister for Political, Legal, and Security Affairs Wiranto said since its establishment two months ago, the Saber Pungli Illegal Levies Eradication Task Force has received more than 22,000 reports, submitted be it through its website, Short Message Service (SMS) or directly through the Call Center.

Weve followed up most of those reports, in related institutions handling public services allegedly collect illegal levies, and weve imposed administrative or legal sanctions to those institutions, Wiranto told the press after a limited cabinet meeting on the Follow-up Discussion of Legal Reforms at the Presidential Office, Jakarta, Tuesday (17/1).

According to the Minister, President Joko Jokowi Widodo has decided to continue the program until Indonesia is free from illegal levies.

Related to smuggling cases, Wiranto said the Government would investigate methods used in the smuggling, goods that are often smuggled, areas prone to smuggling practices, and the best ways to tackle the problem. It will be discussed in the next limited cabinet meeting, the Minister said.

On that occasion, the Minister also mentioned the plan to relocate prisons.

He added that the Government is studying to choose outermost islands to be used as new prisons to relocate inmates from overcrowded prisons.

With the relocation, it is expected that inmates can be separated; for example drug convicts, terrorism convicts or ordinary crime convicts can be separated, he said. Because of those inmates are still put in the same place, it will certainly create an unhealthy condition and they will influence one another, the Minister further said.

Regarding app-based ticketing system e-tilang (e-ticket), the Minister said that the Indonesian National Police, the Attorney General Office, the Ministry of Finance, and state-owned Bank Rakyat Indonesia (BRI) have made an agreement to cooperate on the new program.

He added the Government has also implemented e-tilang pilot project in 16 regional police and will be continued in other Regional Police.

And the payment will be done though banks. Thus, it will become a new way in obtaining those permits, Wiranto said, adding that with the online system, the people also do not have to return to their respective regions only to obtain a Police Clearance (SKCK).