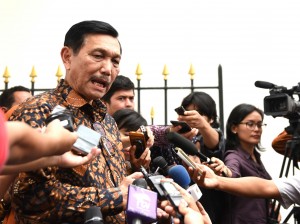 Coordinating Minister for Political, Legal, and Security Affairs Luhut B. Pandjaitan admitted that security disturbances may occur in several regions in Indonesia, including  terror, at the end of the year. However, the Minister stressed that this threat does not happen only in Indonesia.

Its a global issue. The threat may happen in a number of countries, including Indonesia, Luhut said to the journalists after a Plenary Cabinet Meeting, at Bogor Presidential Palace, West Java, on Tuesday (8/12) afternoon.

According to Luhut, the Government has anticipated the potential of security disturbances by adding security elements at the airports as well as other places that could be under threat.

We have anticipated it and it has been reported to the President. The President asked us to be alert, Luhut said.

The Minister did not mention specifically the number of troops that will be deployed to anticipate the disturbances. However, he mentioned that Indonesian National Defence Forces (TNI) will deploy as many as possible.

I dont know exactly how many, but if we can, we will deploy as many as possible, Luhut explained.

According to the Minister, there are six provinces that have the potential of security disturbances. Luhut did not mention them, but he guaranteed that these provinces are watchful.

Manado? I think its about Mayor election, isnt it? So far, I have not received any reports. That region has been given extra security which I have been prepared with the Chief of Indonesian National Police, Luhut said.

Meanwhile, asked about the Simultaneous Regional Elections (Pilkada) on Wednesday (9/12), the Minister said, regarding the problem of Ujang Iskandar-Jawawi candidacy in Central Kalimantan, the elections in this province must be postponed.

According to Luhut, the Government will study the legal side of this problem whether the elections can be postponed for 10 days or they must find another solution.  (MMB/YM/Naster)