Selecting Candidates for Constitutional Judges, Selection Committee Opens up Opportunities for Public to Express Their Views 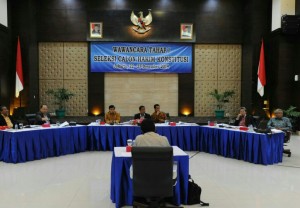 As many as 15 candidates for constitutional judges of the Constitutional Court (MK) who had passed administrative selection underwent interviews as the next stage of the selection processes. The selection was administered by the Selection Committee, from Monday (22/12) at the multifunction hall of the Building III of the Ministry of State Secretariat office, Jakarta.

The Selection Committee for Constitutional Judges was led by Saldi Isra, with Refly Harun acting as the Secretary, while Maruarar Sirait, Satyo Arinanto, Todung Mulya Lubis, Widodo Ekotjahjana, and Harjono acting as the members. They summoned the 15 nominees who had been declared to have passed the administrative selection, one after the other.

In the interviews, a number of subject matters were asked to the candidates for constitutional judges who took the tests. The subject matters were varied, such as the much-questioned validity of Government Regulation in Lieu of Law (Perppu) Number 1 of 2014 concerning Elections of Governors, Regents, and Mayors, as well as the substantial difference between the direct election by people and the indirect election by the House of Regional Representatives (DPRD), and even the possibilities that state institutions file suit over the legal validity of the Constitutional Court.

I love my profession as a lecturer forever, but I feel the call to take part in the selection for constitutional judges, upon the main reason that I really want to improve this institutions integrity, one of the nominees Sugianto said, when he was asked by Head of the Selection Committee Saldi Isra about his decision to propose himself as a candidate for constitutional judge while he still holds the position of a university lecturer.