Sesmensesneg: Pancasila is Home for All of Us 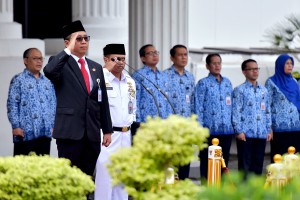 Indonesia is for all of us and Pancasila is the home of all of us, according to Head of the Agency for the Implementation of the State Ideology of Pancasila (BPIP) Secretary to Minister of State Secretary Setya Utama.

He added that Pancasila has been proven to strengthen our equality as a nation amidst diversity of races, ethnicities, religions, beliefs, and cultures in Indonesia. “We are grateful that Pancasila until now has been able to make the Indonesian people live happily in diversity,” he said.

Pancasila as the foundation of the state, the ideology of the country and the philosophy of the nation, he added, was explored by the founding fathers of the nation and is an incomparable gift from the Almighty God for our nation.

He also added that Indonesians must continue to materialize the values of Pancasila in the present and in the future.

In the meantime, President of the Republic of Indonesia Joko “Jokowi” Widodo also sent a message to safeguard Pancasila as stated in the speech, as follows:

Second, through the commemoration of the Birth of Pancasila, we must build togetherness and great hope to welcome the life of a good nation and state. Pancasila as a guiding star contains the vision and mission of the country which provides an orientation towards the future struggle and national development. As positive energy to the nation, Pancasila must be applied as a guide to reaching the future of our nation.

At the end of the speech, Setya invited everyone attending the ceremony to make Pancasila a pillar in building the cultural garden, which is an ecosystem that makes all citizens of the nation live in peace and harmony amid diversity.