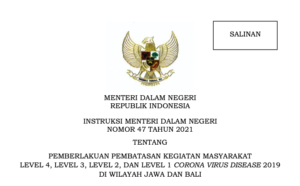 Minister of Home Affairs Tito Karnavian on Monday (04/10) has signed Instruction Number 47 of 2021 on Public Activity Restrictions (PPKM) Level 4, Level 3, Level 2, and Level 1 in the Islands of Java and Bali.

On this extension period of PPKM, Blitar city in East Java province has recorded an improvement. The level of PPKM in the city has significantly dropped from Level 3 to Level 1.

“The Government will carry out simulation of PPKM Level 1 [New normal period] in Blitar city. The simulation to be carried out will take into account the WHO standards that have been fulfilled, the vaccination rate in the city has reached 70 percent, and the first dose of vaccination for the elderly has reached 60 percent,” Coordinating Minister for Maritime Affairs and Investment said during press conference on PPKM (04/10).

The regencies/cities that impose PPKM based on its levels are as follows.

As many as 107 regencies/cities in seven provinces that impose PPKM Level 3 are as follows:

As many as 20 regencies/cities in three provinces that impose PPKM Level 2 are as follows:

There is only one city that imposes PPKM Level 1, namely Blitar city. (DND/PR of Ministry of Home Affairs/UN) (AP/MUR)