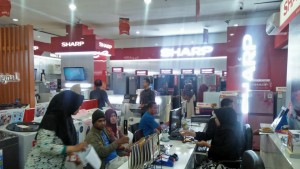 Japanese electronica giant Sharp and South Korean electronics giant LG have announced plan to relocate a number of their factories from Thailand and Vietnam to Indonesia, Ministry of Industry has reported.

This will provide a large amount of employment, the Ministrys Director of Electronics and Telematics of Janu Suryanto said as quoted in a press release on Sunday (16/6).

The Ministry also has stated that manufacturing industry is one sector that contributes significantly to total investment in Indonesia.

Sharp and LG’s investment accounts for around hundreds of billions of rupiah, Janu added.

In the meantime, Minister of Industry Airlangga Hartarto said Indonesia has the opportunity amidst the ongoing United States and China trade war because the country has a strong economic base in facing the current global situation.

Amidst this trade war, investors see our country in a safe zone, the Minister said.

Indonesia, Airlangga added, has also entered the investment safe zone since 20 years ago at the start of the reformasi period.  As a country with fairly stable geopolitical conditions, Indonesia has increasingly attracted more and more foreign investors, he said.

Indonesia is being seen as one of the countries that has been serious in developing digital economy and it has brought a positive value for the business people of the world.

One measure that needs to be done is to increase competitiveness of national manufacturing industry so it can be more competitive with industries in neighboring Thailand and Vietnam, he added.