Should There be a Problem in Indonesia, it will affect ASEAN, President Jokowi Says 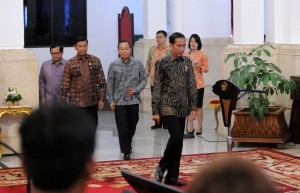 President JokoWidodo accompanied by Governor of National Resilience Institute of the Republic of Indonesia, Coordinating Minister for Political, Legal, and Security Affairs, as well as Cabinet Secretary entering the State Palace to receive the participants of Regular Education Program of National Resilience Institute , in Jakarta, on Wednesday (2/11) afternoon (Pictures: Public Relations Office/Jay)

President JokoJokowi Widodo said that with the biggest population in ASEAN, in which 45% of ASEAN population live in Indonesia, and has 40-45% of Gross Domestic Product (GDP), so should there is a problem in Indonesia, it will affect other ASEAN members.

We have to be aware that our neighboring countries in Asia are our competitors, our rival in obtaining investment and capital. said President Jokowi on his remarks on when receiving the participants of 2016 Regular Education Program (PPRA) Class  54 and 55 (Program Pendidikan RegulerAngkatan/PPRA) of National Resilience Institute of the Republic of Indonesia, at the State Palace, Jakarta, on Wednesday (2/11) afternoon.

Frankly speaking, we have those potentials. We have the power, but we are unable to manage those very well. the President said.

Previously, the Governor of National Resilience Institute of the Republic of Indonesia, Letjend TNI Purn. AgusWijoyo, in his report, said that there is a difference between the two classes.

Attending the event were, among others, Coordinating Minister for Political, Legal, and Security Affairs Wiranto, Minister of State Secretary Pratikno, and Cabinet Secretary Pramono Anung. (FID/JAY/ES)(SU/MMB/YM/Naster)