Show the Passport, Now the Foreigner May Open Bank Account in Indonesia 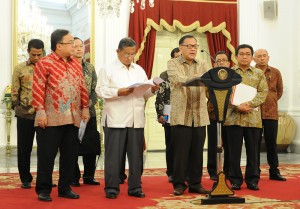 Chairman of OJK Hadad Muliaman, when announcing the foreigner may open bank account in Indonesia, at the State Palace, Jakarta, Wednesday (9/9) evening

To support the package of deregulation and de-bureaucratization launched by President Joko Widodo (Jokowi) in Economic Policy Package Phase I September 2015, the Financial Services Authority (OJK) also launched a policy of allowing foreigners to open an account valued at 50,000 US dollars in foreign exchange banks in Indonesia,

The policy was announced by the Chairman of OJK, Muliaman D. Hadad, at the State Palace, Jakarta, Wednesday (9/9) afternoon, after President Jokowi announced immediately, Economic Policy Package Phase I September 2015 to drive the national economy.

Muliaman said that from the statistics, there are approximately 10-12 million people each year come to Indonesia as a tourist. He believes that from 10-12 million people there are many who come on a regular basis, means, as the frequency of visitors who come for various reasons, may be for a business deal, trade, and there’s a family affair, as well as for school affairs, etc.

“To them then we will provide easiness, because of this simplicity is intended to promote their activities in Indonesia,” Muliawan Hadad said.

“We’ve already established, and shall come into force next week, because the letter will be sent this week, meaning that the opening of accounts valued at $ 50,000 is done by simply showing a passport of the person concerned,” Muliaman said.

“Later there is a requirement to be conveyed, namely a passport plus a certificate of additional, possibly evidence of residence, or certificate of the wife, etc.,” said Muliaman, adding that, all will be expressed, outlined in a letter to the foreign exchange banks in Indonesia. (UN/DNS/ES)/Sy.