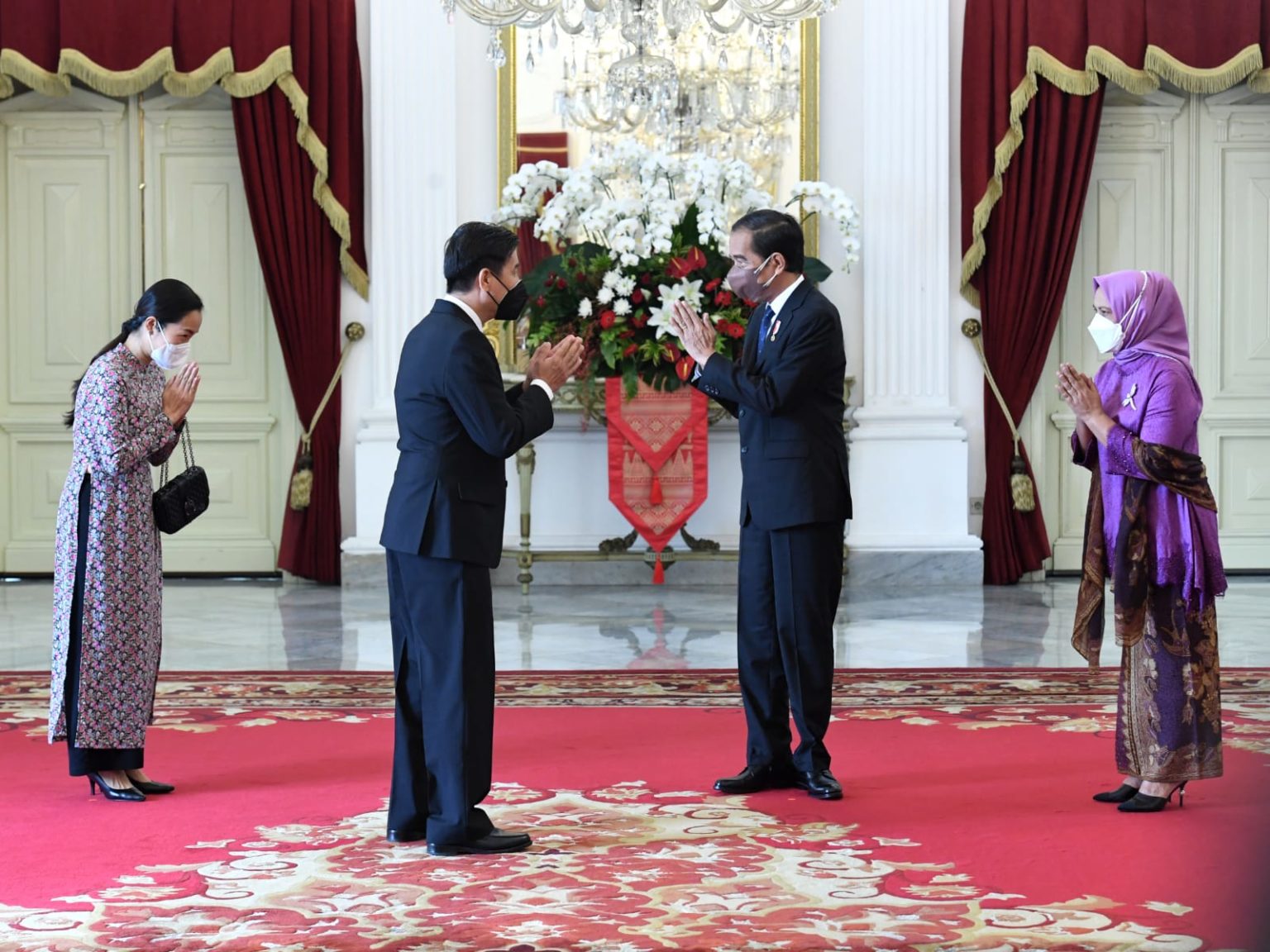 President Jokowi accompanied by First Lady Iriana during a ceremony to receive Letters of Credence from six Ambassadors of friendly countries, at the Merdeka Palace, Jakarta, Wednesday (03/02). (Photo by: Presidential Secretariat/ Lukas)

President Joko “Jokowi” Widodo on Wednesday (03/02) at the Merdeka Palace received Letters of Credence from six Ambassadors Extraordinary and Plenipotentiary of friendly countries.

On that occasion, the six ambassadors also shared their plans and wishes to further enhance bilateral ties between their respective countries and Indonesia.

“It is my fervent hope that we can give contribution as much as possible to ensure that our beautiful relations can continue to be maintained,” he said.

Ambassador Extraordinary and Plenipotentiary of the Republic of Turkey, Aşkin Asan, said that Indonesia and Turkey share a long history, adding that the relations between the two countries not only reflect political and economic ties but also take into account long-standing historical and cultural relations.

“Turkey and Indonesia share similar values. We have enormous potential if we work together. Thus, I think we must redouble efforts to collaborate on various sectors. I will work harder to bolster collaboration and cooperation between our two countries and people,” she said, while stating her commitment to bring Turkey-Indonesia’s relations to the next level.

Indonesia also has been establishing historical relations with Algeria since the Asia-Africa Conference in 1955.

Ambassador Extraordinary and Plenipotentiary of the People’s Democratic Republic of Algeria, Lahcene Kaid-Slimane, said that the Algerians are proud of the long-standing historical relations between Indonesia and Algeria.

In the meantime, Ambassador Extraordinary and Plenipotentiary of the Republic of Peru, Luis Raūl Tsuboyama Galvān, noted that cooperation in economic sector is one major pillars in bilateral ties between Peru and Indonesia, adding that he aimed to boost bilateral trade with its counterpart by working on free trade negotiations.

Cooperation in economic sector is also a priority of Ambassador Extraordinary and Plenipotentiary of the Socialist Republic of Vietnam, Ta Van Thong, in performing his ambassadorial duties in Indonesia.

“My priority is to further bolster economic cooperation between the two countries particularly on trade sector. We are aware that Vietnam and Indonesia are neighbors in the Southeast Asian region. The population of the two countries combine makes up 60 percent of the total population in ASEAN. Thus, I have set a target to boost our trade volume to 60 percent of the total ASEAN’s trade volume,” he said.

Ambassador Extraordinary and Plenipotentiary of the People’s Republic of China, Lu Kang, underscored that Indonesia and China are two big developing and important countries in the region, adding that the two countries have been rising and made improvement in many sectors.

“I am surely responsible for keeping to the agreements signed by both presidents. I also hope to promote more cooperation which will benefits our people and to maintain stability and prosperity of the region,” he said. (Presidential Secretariat/UN) (RAS/EP)