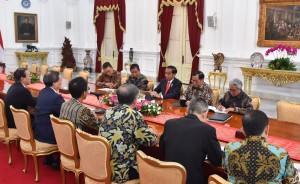 According to Jonan, the revised plan of development (PoD) for the management of Masela block has also been completed.  The Government has also granted approval to the development of the block, he said.

On the occasion, President Jokowi expressed hopes that Inpex will remain committed to the PoD and maximize the local content and empower local workforce in running the gas block.

For the record, the revised PoD is a follow-up to the signing of the head of agreement (HoA) between SKK Migas and Inpex on 16 June 2019 in Tokyo, Japan. The next phase of the Masela block development is the final investment decision (FID).

In the meantime, CEO of Inpex Corporation Takayuki Ueda welcomed the completion of the revised PoD and vowed that his company woul implement the commitment that has been agreed upon.

If the project (of the development of the gas block) lasts until 2055, it will bring multiplier effects to Indonesias economy and contribute to Indonesia’s GDP worth US$153 billion as well as create more jobs, Ueda said, adding that the project will create around 73,000 jobs. (BPMI Setpres/ES)