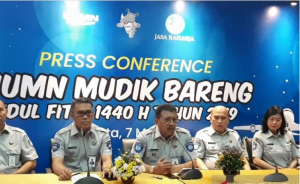 Director of Jasa Raharja Budi Rahardjo on his press conference on this year BUMN Mudik Bareng program, in Jakarta, Tuesday (7/5). (Photo by: Antara)

Just like in the previous years, Ministry of State-Owned Enterprises has announced it will provide free mudik (annual exodus) trip program ahead of this years Eid Day.

According to Budi, target of the participants of the program – which goes by the name of BUMN Mudik Bareng – ,has been increased by 22.2 percent compared to the number of participants in the previous year at 204,146 travelers.

As many as 104 state-owned enterprises will be in collaboration to carry out the program this year and they will provide 3,897 buses, 138 ships, 49 trains, and 76 airplanes. Last year only 64 SOEs joined the program.  (ANT/ES)