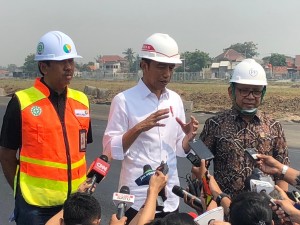 To date, the construction progress of third runway at Soekarno Hatta has already reached 86 percent. We hope that it will reach 100 percent by the end of this month and the runaway can start its operation in July, the President said.

Once the third runaway is completed, the airport will have 120 aircraft movements per hour – up 50 percent compared to the previous 81 movements – so requests from several foreign airlines to operate at the airport can be fulfilled, he added.

The President also expressed hope that issues relating to aircrafts queuing for landing can now be resolved.

The Government has also planned to add the capacity of the fourth terminal. According to the President, he has since two years ago ordered Minister of Transportation and Director of state-owned airport operator PT Angkasa Pura II to build the fourth terminal.

President Jokowi also underscored explosive growth of aviation industry, adding that if the constructions of new runways, east cross taxiways or new terminals have not been done, Indonesia will lag behind.

We do not want this to happen. Infrastructure must outpace existing growth, the President said, adding that the Government has also improved access to Soekarno Hatta airport by providing airport train service, Light Rapid Transit service, and high-speed train in the near future.