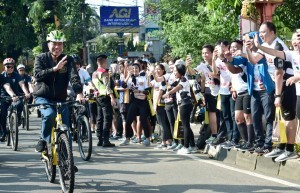 President Joko Jokowi Widodo on Sunday (2/12) rode his bike to Bantarjati Subdistrict, Bogor, as part of his working visit to West Java Province.

In Bantarjati, the President visited houses to inspect the implementation of the program BUMN untuk negeri (State-Owned Enterprises for the nation): Free Electricity Installation for low income households. Under the program, thirty four State-Owned Enterprises work hand in hand to provide free electricity installation for the low income families to improve their access to electricity.

President Jokowi said that after the electricity installment, the families only pay Rp25,000 to Rp30,000 per month.

For the record, data from the National Team for the Acceleration of Poverty Alleviation (TNP2K) shows that there are currently 235,756 low income households in West Java who have no access to electricity from the state-owned electricity company PLN. Those families can only access electricity from their neighbors and should pay approximately Rp50,000 to Rp60,000 per month.

“There are 1.2 million (households) in all provinces (that have no access to electricity). We will gradually provide electricity access for them,” the President said.