Solemnization at the Palace is not Handover Position, But Welcoming Ceremony to President Jokowi 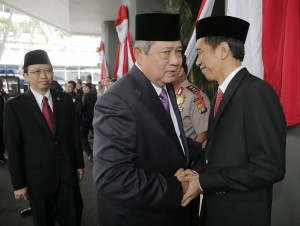 Solemnization at the Palace is not Handover Position, But Welcoming Ceremony to President Jokowi

Coordinating Minister Djoko Suyanto tries to clear the confusion about news of welcoming ceremony for the President of 2014  2019 at Istana Merdeka, Jakarta, on Monday (20/10) afternoon, after Joko Widodo (Jokowi) and Jusuf Kalla (JK) are sworn at The Peoples Consultative Assembly as President and Vice President.

Djoko Suyanto affirms that the event at Istana Merdeka is intended to create new tradition in the transition of National Leadership in dignity and peace, which has not been ever practiced.

After lead final Plenary Assembly at the President office, President SBY said would welcome President Jokowi at the Istana Merdeka after his inauguration at the MPR on Monday (20/10) morning with a military parade and great ceremony.

Mr Jokowi will be welcomed by firstly receive a homage from Paspampres, then both of us will parade to the Istana Merdeka where I introduce employees of Presidential Institution who will assist him, said SBY and adds that he then would return to his private residence in Cikeas, Bogor, West Java.

According to SBY, it is a new tradition in welcoming new national leadership in peace and noble way. That is more or less the historical episode on October 20th and hopefully would persists in order to create a respectable and noble transition that is good for education of the nation, said SBY.

According to the schedule, Jokowi and JK would be sworn as a President of the Republic of Indonesia for 2014  2019 in Plenary Assembly of MPR, on Monday (20/10) at 10:00 AM. The inauguration would be marked by the pronunciation of oath by the President and Vice President.

Next, at 10:45 AM, Jokowi would give the first speech as a President. After the reading of prayer closing  On 11:00 AM would be a closing of Plenary Assembly of MPR preceded by a prayer. After inauguration, President Jokowi and Vice President Jusuf Kalla would follow a state banquet where Head of State from other countries and the Ambassadors would present.

President Jokowi is also scheduled to be present at the Peoples Party at Monas on Monday evening and release 7000 lanterns. (IML/ES)(Ifp)