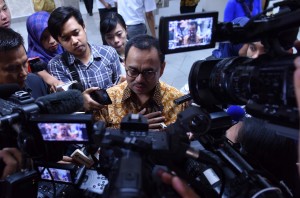 Following the instruction from President Joko Jokowi Widodo in a limited meeting at the Presidential Office, Jakarta, on Monday (7/12) to accelerate waste management into electricity, Minister of Energy and Mineral Resources Sudirman Said explained that he would coordinate with Minister of Home Affairs Tjahjo Kumolo and Minister of the Environment and Forestry Siti Nurbaya to decide cities that will implement the pilot project.

Thus, if the cities have been chosen, there will be tariff applicable for electricity based on the waste and it would be carried out by PLN (State-Owned Electricity Company). Hopefully it could be completed, Sudirman Said added after the meeting.

Regarding the cities to be appointed as pilot project, Sudirman explained that ten cities would be selected, including Solo, Surabaya, Bandung and Jakarta.

We will hear the recommendation from Minister of Home Affairs because he knows about the mapping of the cities, Sudirman addded.

However, because the rules and regulations are not clear enough, the project is not run at its maximum, he added.

Based on the result of the limited meeting, Sudirman explained that there are three things that must be done.

There are many investors who are interested. However, due to unclear regulations, we have three tasks. Firstly, the regulation must be defined and simplified. Secondly, tariff must be defined as well, so at cities, investors and PLN can have clarity on how they must bear the cost. Thirdly, those institutions must choose their pilot project in order to be well supervised, the Minister said.

Regarding the tariff determination, Sudirman explained that it would include the amount of subsidy as well because the Government must provide the subsidy if the program needs it.

According to the Minister, the discussion on the regulation also stressed on the needs to take some measures to meet the target by 23 percent in 2025.

Thus, the conclusion is to clean the cities from waste and somehow to meet the target of new and renewable energy, the Minister said.