Sports Associations Urged to be Active to Host International Events 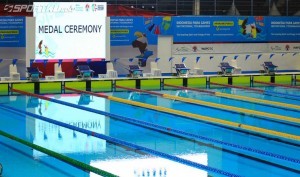 To host the 2018 Asian Games is an extraordinary achievement for Indonesia.

In addition to athletes achievement that has brought Indonesia to the fourth place in the Asian Games medal tally, Indonesia also now has many world-class sport arenas, where Asias largest multi-sport event took place from 18 August to 2 September.

Therefore, the Indonesia Asian Games 2018 Organizing Committee (INASGOC) has urged the executives of sport associations and the Government to initiate other international championships in their respective sports branches once the 18th Asian Games is over.

We want the executives of sports associations to become proactive in initiating other international championships because Indonesia now owns world-class arenas, such as those for equestrian, rowing and soccer, Chief of the INASGOC Erick Thohir said at a press conference at Main Press Center (MPC) of the 2018 Asian Games, Jakarta Convention Center (JCC) Senayan, Jakarta, on Saturday (1/8).

Erick cited the example that Indonesia is scheduled to co-host the 2023 FIBA Basketball World Cup, along with Japan and the Philippines. Indonesia has many sports arenas that were poorly maintained because the country rarely hosts sports tournaments. We should learn to organize more (sport) events, said Erick, who is also Chairman of the Indonesian Olympic Committee (KOI).

Besides equestrian, rowing and soccer arenas, Erick also mentioned that Indonesia also has the capacity to host the world championships of athletics and cycling, as the country now has world-class arenas and stadiums.

If Indonesia rarely hosts sports tournaments, the public will probably forget the art of standing in line that they used to do during the Asian Games. The organizing of sports tournament is also aimed at shaping Indonesia into a competitive nation in a peaceful manner, Erick added.

Erick also revealed that the 2018 Asian Games had 17,244 athletes and officials in participation, and also 11,000 local and foreign journalists that exceed the expectation of INASGOC.

After (all sporting events) are over, we will hold the Asian Games closing ceremony as a form of Asian nations celebration, he said.

However, the closing ceremony, he added, is not the final task for INASGOC as the Committee will continue to manage the departures of all Asian Games athletes, officials, and foreign journalists to their respective countries. We will finish our entire work in April next year. We want to complete the administration because many multi-sport events encountered some administration issues, Erick concluded. (INASGOC PR Division/ES) (RAS/EP/Naster)