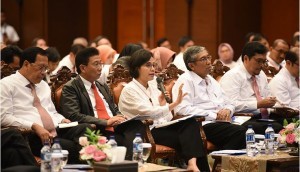 Amidst turmoil in the current global economic condition, Minister of Finance Sri Mulyani Indrawati expressed gratitude for closing 2018 with a very good performance.

State revenues reached 100 percent, state expenditures reach 97 percent and the Primary Balance Deficit is now below 2 percent since 2012, Sri Mulyani said at a video conference event with all working units of Ministry of Finance that spread in 34 provinces, Jakarta, Monday (31/12).

According to the Minister, state revenues from taxes, customs and non-tax state revenues (PNBP) are growing high and strong. The realizations of state expenditure, she said, are also good, both at the Central Government and in the regions, while financing contracted with the State Budget deficit of 1.72 percent of GDP, lower than the projection of the 2018 State Budget Act of 2.19 percent. This is the smallest deficit figure since 2012, Sri Mulyani said.

Furthermore, the primary balance is surplus of Rp4.1 trillion, which is the first time since 2011, Sri Mulyani said. The Minister added that for the first time in 15 years, the Government did not propose changes to the 2018 State Budget Act, thus encouraging all ministries/agencies to focus to implementing the budget plan.

I am grateful that we have all succeeded in completing 2018, the Minister said, adding that the total State Revenue will probably reach beyond 100 percent.

Based on what has been achieved in 2018, Sri Mulyani expressed optimism in facing 2019. Nevertheless, the Minister still reminded her staff not to be complacent and to maintain vigilance against the dynamics and uncertainty of domestic as well as global economic conditions. With big optimism, we must not forget to be also cautious, Sri Mulyani concluded. (Humas Kemenkeu/ES)