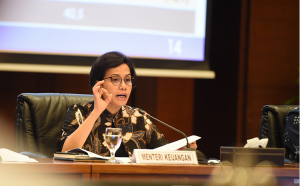 Although national domestic economy was under pressure due to trade war and normalization of US monetary policy, Indonesias economy in 2018 showed positive achievements, according to Minister of Finance Sri Mulyani Indrawati.

The national economy in 2018 is expected to grow by around 5.15 percent, higher than in 2017 which grew 5.07 percent, the Minister Indrawati said at a press statement at Jakarta, Wednesday (1/2).

The high economic growth, according to her, has also succeeded in creating new job opportunities, reducing unemployment, and reducing poverty and inequality.

The Government breakthroughs in poverty alleviation and social protection programs have contributed positively to the improvement of welfare indicators, the Minister said.

On that occasion, Sri Mulyani also said that domestic demand especially on household expenditure, investment and the Government expenditure is the primary driver of the economic growth in 2018. On the other hand, export and import increase are still limited in line with the trend of weakening world trade due to the trade war pressure, she said.

The rise of economic growth in 2018 was also supported by favorable macroeconomic conditions such as the controlled price fluctuation, the Minister said.

The low inflation rate of 3.13 percent in 2018 supports people’s purchasing and consumption power, she said.

Furthermore, thanks to strong synergy between monetary and fiscal policy institutions, the Government is able to maintain economic stability as well as maintaining the improvement of economic growth and fiscal. The stability is indicated by the rebound of Rupiah which had previously depreciated to the lowest level of Rp15,200 per US Dollar to Rp14,247 per US Dollar in average.

The Indonesian economy has also gained a positive perception from the international world. Throughout 2018, at least five world rating institutions confirmed the position of Indonesia’s investment grade rating. In fact, Moodys has upgraded Indonesias rating outlook to stable position in April 2018. Meanwhile, Indonesia’s Global Competitiveness Index rose from 47 in 2017 to 45 in 2018.

Furthermore, the success of the Asian Games and Annual Meeting IMF-World Bank held in 2018 is also a reflection of the high international confidence in the progress of Indonesias national economic development. (Humas Kemenkeu/ES)