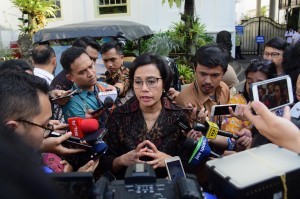 Minister of Finance Sri Mulyani said that pressure on the Indonesian currency rupiah has eased.

Nevertheless, she added that confidence in Indonesias economy must be maintained and and global condition must be monitored. Capital inflows have also returned to the Indonesian market, bringing a positive sentiment to the countrys balance of payment, she said.

We will continue to coordinate with Indonesian central bank Bank Indonesia (BI) in terms of maintaining perceptions, given last years positive State Budget in which the primary balance is close to zero and the deficit is much smaller, Sri Mulyani told reporters at the State Palace, Jakarta, Monday (7/1).

For the record, Bank Indonesia middle exchange rate showed that rupiah continued to strengthen against US Dollar. On Monday (7/1), the Indonesian currency was traded at Rp14,105 against the US dollar, higher than that last week at Rp14,350.

The Minister further said that based on President Joko Jokowi Widodos direction, it is important to implement what is allocated in the 2019 State Budget. The 2018 budget absorption, she added, reached 99 percent thanks to additional expenditures such as for the hosting of Asian Games and the transfer of disaster budget to ministries/institutions, resulting in better budget absorption.