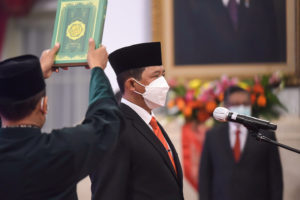 The inauguration of Head of the National Disaster Mitigation Agency (BNPB) Suharyanto at State Palace in Jakarta (17/11) (Photo by: PR of Cabinet Secretariat)

“After the inauguration, Mr. President ordered us to work considering that we are now in a disaster season,” Suharyanto said during press conference at State Palace in Jakarta.

According to him, the duty as Head of the BNPB is an honor but it also has risks given Indonesia’s geographic location that are prone to natural disasters.

The BNPB, Suharyanto added, must be present in every step of disaster mitigation, including in raising awareness and providing education for people, mitigation, rehabilitation, and reconstruction so that people affected by disasters can be handled as soon as possible.

On that occasion, Suharyanto also expressed gratitude to former Head of the BNPB Ganip Warsito for his achievement and added that he will continue the programs that have previously been set.

“The program that we will prioritize is that during disasters, the BNPB can be able to present as fast as it can to help people affected by the disasters so that they will immediately get help and their basic life rights,” he remarked. (FID/UN)(AP/EP)