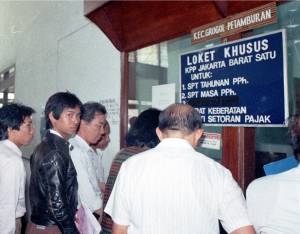 In consideration of developments in the economic and monetary as well as growth rising prices of basic needs, the government through the Ministry of Finance has increased the personal exemption limits (PTKP) from Rp 24.3 million to Rp 36 million per year.

The decision to increase the exemption limit was contained in Finance Minister Regulation (PMK) Number: 122 / PMK.010 / 2015 on the adjustment amount of personal exemption, which was signed by the Minister of Finance PS Bambang Brodjonegoro on June 29, 2015 last.

Article 1 of the Minister of Finance Regulation (PMK) mentioned, the amount of non-taxable income adjusted as follows:

4.    USD 3,000,000.00 (three million rupiah) for each member of the family blood relatives and related by marriage in direct lineage as well as adopted children, to be borne entirely, at most 3 (three) people for every family.

According to PMK, the necessary provisions regarding the method of calculating the amount of personal exemption for an individual taxpayer regulated by the Director General of taxation.

“Further provisions concerning the adjustment of the amount of non-taxable income referred to in Article 1 shall take effect on tax year 2015,” reads Article 3 of the PMK.

This Regulation comes into force on June 29, 2015 promulgated by the Minister of Law and Human Rights Yasonna H. Laoly. . (Biro Infokom Kemenkeu/ES)