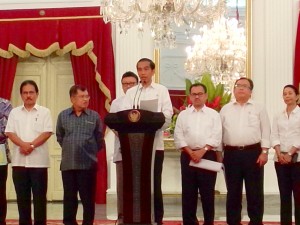 President Joko Widodo (Jokowi) in the Merdeka Palace Jakarta on Monday evening announced that starting on Tuesday at 00.00 a.m. local time, the government rose the subsidized fuel price in premium type from IDR 6.500/liter to IDR 8.500, while the diesel fuel also rose from IDR 5.500/liter to 7.500/liter.

President accompanied by Vice President Jusuf Kalla and a number of Working Cabinet explained that the policy to rise this fuel price was a difficult choice; therefore the government had to choose.

President continued, as the consequences of the diversion, the government had thought about the impacts and further plans. For the poor people, there will be social protections in the form of Healthy Indonesia Card (Kartu Indonesia Sehat-KIS), Bright Indonesian Card (Kartu Indonesia Pintar-KIP) and Prosperous Family Card (Kartu Keluarga Sejahtera-KKS) that can be used to maintain the people purchasing power, Jokowi said.

President realized that the policy to diverse the subsidy by rising this fuel price will cause debates, pro and contra opinions but the government can appreciate it.

President expected the subsidized fuel diversion is the opening way to bring more benefits for all Indonesian people.

Meanwhile Financial Minister  Bambang Brojonegoro answered the journalists question by saying that the fuel price hike will give IDR 100 trillion additional productive expenditure for the government.

The productive expenditures will go to infrastructures, some of them will strengthen the social protection for poor and almost poor families, and the most important thing is to realize the vision of President Jokowi including the development in maritime sector, Bambang said.

National Development Planning Minister Andrinov Chaniago added that the additional budget from subsidized fuel diversion is to improve the food production. It will be used to repair the broken irrigation and build the new irrigation, and Insya Allah in the next three years we will able to be self-sufficiency in rice, he uttered.

In addition, according to Andrinov, the additional budget from the subsidy diversion will be used to improve energy production by accelerating the realization of power plan development, and also for maritime and marine sectors, road developments and repairs, and also the new roads that prioritize the people interest which is to be the more productive people.

Financial Minister  Bambang Brojonegoro admitted that the policy to raise the subsidized fuel price will bring inflation impacts and it had been calculated by the government.

Financial Minister also expected the deficit in 2014 that was earlier predicted for 2,2 percent can be controlled under the 2,2 percent..