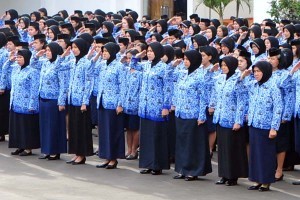 Minister of State Apparatus Empowerment and Bureaucratic Reform Syafruddin on 18 September, 2018 signed Circular Number 20 of 2018 on Dismissal of State Civil Apparatus (ASN) Convicted of Graft. The Circular aims to clean up bureaucracy from corruption, collusion and nepotism.

The Minister, through the Circular, asked Personnel Supervisor Officers (PPK) and Authorized Officials to comply with provisions of Article 87 paragraph (4) of Law Number 5 of 2014 on State Civil Apparatus jo Article 250 of Government Regulation Number 11 of 2017 on Management of Civil Servants.

The aforementioned provisions stipulate that Civil Servants (PNS) shall be dishonorably discharged because of the following:

a. violating the principle of Pancasila and the 1945 Constitution of the Republic of Indonesia;

b. being sentenced to prison or detention based on legally binding court decision for committing power-related crime or other crimes;

c. becoming member and / or functionary of political parties; and

d. being sentenced to prison based on legally binding court decision for committing crime with prison sentence of at least 2 (two) years or premeditated crime.

“This is intended to prevent the potential loss of the State Budget / Regional Budget resulting from negligence and / or omission of the legal issues,” the Circular reads.

Minister of State Apparatus Empowerment and Bureaucratic Reform further instructs Personnel Supervisor Officers (PPK)/Regional Heads and Authorized Officials of the Government institutions to report the implementation of the Circular no later than 30 November 2018.

The copy of the Circular is addressed to: 1. President of the Republic of Indonesia; 2. Vice President; 3. Chairman of the Supreme Audit Agency (BPK); and 4. Chairman of the Corruption Eradication Commission (KPK).